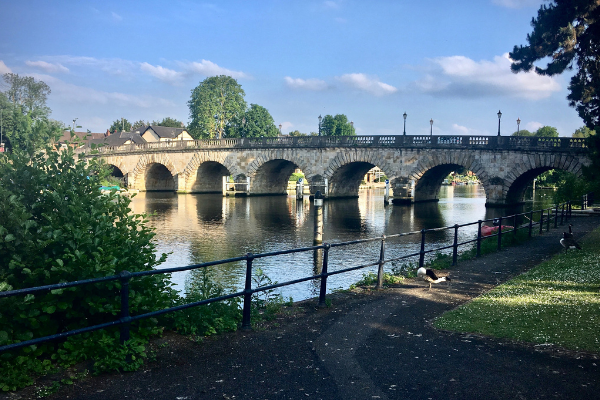 Come on, Windsor and Maidenhead Council - let's do what needs to be done and let's get Maidenhead off the EV charging list of shame when it's next published.
Opinion & News 8 October 2021

Maidenhead, a few miles from Heathrow Airport, the M4 and the M40, is not known as a hotbed of automotive innovation. There was the little-remembered GWK made there 100 years ago and the infamous Marendaz Special built in the 1930s by noted Oswald Mosley supporter, Captain Donald Marendaz.

Fast forward to the current century and Tesla UK based themselves in modest offices opposite the station in the middle of Maidenhead for a while. Saab used to be based just down the road before their demise. Volvo remain prominently in place, near the site of the old Vandervell factory, home of the Vanwall racing car, of Stirling Moss fame.

So yes, there is a modicum of automotive DNA in the Royal Borough of Windsor & Maidenhead. All the more embarrassing then for the Borough to outed on the EV catwalk of shame by The Sunday Times as one of the worst places in the whole of the UK for the provision of public EV charging.

With Maidenhead in sixth worst place (and nearby Slough even worse in fourth), the numbers get even more shaming. Between them, the table also shows that these prosperous areas can claim a total of 25,508 electric vehicles, which places them among the most EV-woke areas in the entire country. The figures may be skewed a bit by the Heathrow and west London taxi/Uber effect, but just glance round the car park at Waitrose Maidenhead to see an extraordinary number and range of electric cars from Zoes to Taycans and everything in between.

Yet, in the combined Maidenhead and Slough Boroughs, there is a shameful number of public charging devices relative to other places, using the Sunday Times's methodology of ranking by chargers per 100 EVs. There are a puny 107 public charging devices, according to The Sunday Times, 238 per EV in the two boroughs. In some ways the table is based on a strange premise, as most if not all local EV owners will charge at home, but it does at least provide an insight into provision. The mismatch it reveals is the enthusiasm and appetite for EV ownership in a locality in contrast with public provision to charge locally. What about residents who don't have off-street parking? Low public provision means few options for that demographic. And visitors? That number of public chargepoints is a totally pathetic figure for one of the most prosperous and busy areas of the UK outside of London. And that's chargepoints of all types and not just rapid-charge devices.

Looking further at the tables for best and worst provision of chargepoints, it's inevitable, socially and politically, that Westminster and Kensington and Chelsea should be near the top. But at the very top of the national table is Coventry, with one public charger for each 2.4 electric vehicles. You could rationalise that by reflecting on Coventry's deep automotive heritage. But nestling just a bit below Coventry in the list of EV glory is rural Pembrokeshire, with a pretty comfortable 3.6 cars per public chargepoint. The influential factors in west Wales are very different from those nudging industrial Coventry to the top of the list.

And why is it the way it is?

Why are some areas near the top and others near the bottom? It's clearly nothing to do with the absolute number of EVs. It can surely only come down to local government resolve and commitment to the switch to EVs. Yes, Coventry has a labour-majority council and Pembrokeshire is controlled by Independent and Non-aligned councillors. And yes, Maidenhead is a solidly Conservative council and has been for a long time. But the global imperatives that are driving the switch to EVs should be way beyond politics and simply driven by common sense and a reaction to the doom-laden future that threatens us all unless we shape up and step up.

There is Government money available in several forms to help councils focus on local charging provision. There are multiple opportunities for the formation of creative relationships with local businesses that could stimulate private-public partnerships and get chargepoints installed where people need or certainly will need them. There's buckets of data available from analysts and mapping sites such as Zapmap that can inform the decisions that need to be made. And the councils are the ones who control the planning permissions and working arrangements that need to be sorted to make progress with installations.

And here's funny thing! Bookmycharge is based in Maidenhead. So, of course, we're doing what we can to bring as many privately owned chargepoints as possible into shared usage on the Bookmycharge platform. 5,001 EVs in Windsor and Maidenhead and no fewer than 20,507 in neighbouring Slough means a huge number of house owners who have a home chargepoint. If just 0.5% of those owners put their chargepoint on Bookmycharge, it would more than double the number of charging places publicly available in the two boroughs.

So we at Bookmycharge are doing what we can. But come on, Windsor and Maidenhead Council - get on with doing your bit and let's get Maidenhead off the list of shame when it's next published.