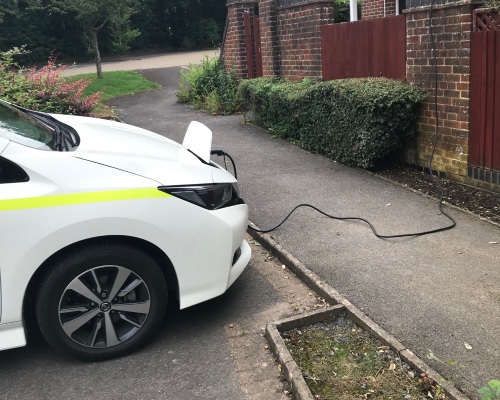 In the last week…

WELSH FURY: In the latest saga of ‘cables over the pavement’, regional media outlet WalesOnlines has reported on Twitter users who have piled in on an EV owner who lumped his car onto a pavement in order to charge from his home. While the debate is not new here it is indicative of the tensions for many millions. This local story alone has nearly 230 comments on it with some users pleading “Why is no one talking about that we just don’t have the infrastructure for us all to have electric cars? I don’t have a drive, which isn’t that unusual. Many people live in flats/apartments. How is it supposed to practically work?”. The thing with this debate is, despite it being a solvable situation through growing infrastructure, in the short to medium term it’s causing a lot of doubt. Government really needs to grip this issue. From a Bookycharge perspectve, we are, of course, working to promote sharing and greater availability of chargepoints so that in future this sort of thing is less likely to happen... Read the story.

CHARGING AHEAD: For the last four months, sales of new cars have been rather poor. However, that has all changed this month according to the latest figures released yesterday by the Society of Motor Manufacturers and Traders (SMMT). Sales for November have risen by 1.7% compared to the same time last year. The even better news is that the drive upwards seems to have been propelled by a surge in EV purchases. Last month, almost 22,000 pure electrics were registered according to SMMT – that’s about 20% of all registrations. This is pretty much double compared to November 2020, consequently when the Government first announced its decision to ban the internal combustion engine from 2030. However, it’s not all gold. The semiconductor crisis continues to plague the industry and I’m told that wait times for popular EVs remains long. Read more.

CHARGING DROUGHT: In not so great news, SMMT has also warned that, while the rise in EVs on the roads is great, we could be getting to a point whereby the supply of public chargepoints falls behind. This could risk a charging ‘drought’ whereby we’ve got a shortage of public connections. Based on their analysis, just one public charger is being installed for every 52 new plug-in cars. This gives us an overall chargepoint to driver radio of 1 to 16. While I’m not sure we’re anywhere near the point where we need to panic, regular readers will recall that the quarterly Department of Transport chargepoint statistics has shown slow growth over the last year. However, let us not forget that there are some quarter of a million government-backed home chargers on people’s driveways now. Read SMMT’s analysis.

FIX IT: With the news that EVs continue to surge ahead, the head of Halfords, a man named Graham Stapleton, has warned this week that the UK may face a shortage of specialist EV mechanics in future. According to an analysis by Halfords, some 35,000 technicians will be needed to deal with EVs by 2030. He has therefore pleaded for state support to plug the skills gap. But, I’m rather suspicious of this plea by Mr Stapleton. Ignoring the fact that Halfords is looking to expand to 1,400 locations, I also think he’s missed a crucial point. You see, EVs aren’t just powered differently, they are being sold differently. The electric car isn’t just a means of transport, they are being sold as your life on the move, and as such it’s being sold not as a traditional car might, but as a lifestyle product. The smartphone on your driveway. And, as such, companies are dealing with their customers in a new way. Whereas in the olden times you might get your car via a salesroom and then have to deal with your local mechanic, nowadays and in the future people are buying cars more directly from manufacturers, sometimes even at shopping centres. And even when they are not bought straight from the source, much like your mobile, they can often only be fixed by specialists from that company – otherwise, you mess up the warranties. That’s why we’re seeing an increasing number of companies, such as Polestar, Tesla, and Genesis, building huge owned networks to provide maintenance services, amongst other things. So, sorry Stapleton, but you’re pushing against the grain here.

NEW HUBS: Speaking of hubs, Toyota is preparing to sell its new stupidly named bZ4X electric SUV via a series of new hubs that will offer specialist advice to customers. Many of the hubs will likely appear at current dealerships. Auto Express have the story. Elsewhere, Toyota has also revealed they are planning to invest some $1.25 billion into creating a new battery plant in North Carolina – this involves $435 million of subsidies. Read more on Electrek.

PARTS PANIC: According to a recent poll of almost 100 companies for the European Association of Automotive Suppliers, Clepa, half a million jobs would be at risk under the EU’s plans to ban combustion engines by 2035. This is because EV’s have far fewer internal parts. This isn’t the first time parts suppliers have shared concern, Bosch’s CEO has previously been very critical of EVs. However, the good news is, according to PwC, some 226,000 new jobs will likely be created in the production of electric parts. Read more.

DAZED: Lucid, the EV start-up headed by British automotive geezer and former Tesla engineer, Peter Rawlinson, is being investigated by America’s Securities and Exchange Commission. It comes following their recent public listing via a special purpose acquisition company. According to Lucid, the SEC subpoenaed information at the end of last week relating to projections and statements it made when merging with Churchill Capital Corp IV, the SPAC run by Citigroup. Shares have tumbled as a result by 10%. Read more.

ON AUTOPILOT: Yesterday, the New York Times published a slamming article about Elon Musk and his promotion of autopilot technology to customers. It comes as the National Highway Traffic Safety Administration (NHTSA) is investigating at least 12 accidents in which Teslas using Autopilot drove into parked fire trucks, police cars and other emergency vehicles, killing one person and injuring 17 others. The crux of the article comes following comments from 19 former Tesla colleagues who worked on the Autopilot project. What they suggest is that Musk ignored technology like radios in favour of cheaper more aesthetic hardware (cameras). Likewise, they suggest Musk and Tesla have led people to believe the system is more autonomous than it is. I’m not sure the criticism is anything new but, to me, the real blame lies with regulators in the US. Surely, if the NHTSA concludes it was Tesla’s fault in the instances, then why were they A) on the road to begin with but crucially B) allowed to advertise/sell a mistruth? Britain’s not perfect but it’s somewhat reassuring that our authorities are being so strict with the rollout of ‘self-driving’ cars. Read NY Times.

SUPERCHARGERS: In other Tesla news, you may recall that in the Netherlands they recently began trialling the opening of their supercharger network to other brands. As part of a trial, 10 Supercharger stations have been open to non-Tesla owners. Well, it seems to be going well. According to a letter obtained by Bilbransje24, a Norwegian car industry website, Tesla’s public policy manager has sent a letter to Norway’s Ministry of Transport suggesting they were looking to expand the trial to the country. Speaking of their trial, they wrote, “we are now investigating other markets for a potential expansion of the pilot project. We would therefore very much like to meet you to tell you more about our plans.” I wonder if they have also written to the UK as well? Maybe time for some FOIs! Read more.

NEW STARS: Last week, Polestar’s CEO delivered a presentation in New York that included revealing a glimpse of its next vehicle. The car in question is the Polestar 3, it’s an SUV. Based on the released image, it looks like a cross between the Ford Mach-E and a Lamborghini Urus. The plan is the car will be made in South Carolina. Also in the pipeline, the EV automaker is developing a coupe Polestar 4. And the news I was certainly keen to hear is that Polestar will put its Precept Concept into production as a luxury sport GT. All cars will be available by 2024. Read more.