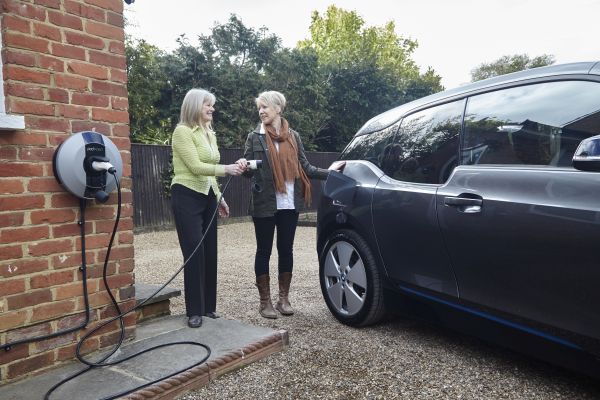 The answer to speeding up EV adoption is, literally, on our doorstep. While the number of public chargepoints will forever be playing catch-up with demand we can get ahead of it quickly by sharing our own chargepoints.
Opinion & News 10 September 2021

In the last year, the popularity of electric vehicles has soared. Not only have their sales more than doubled, but the scale of infrastructure has grown hugely. And who can forget, their acceptance by the wider public has changed completely. What was once a joke industry with little hope, now is the future people want.

However, there remains some difficult challenges if the shift to electrification is to continue at a pace. It’s going to need a lot more money for starters. And this is why the government has been so forward in its support for EVs, to give confidence to those holding the credit cards.

It seems to be working thus far. At the last count by ZapMap, there were more than 25,000 public charging devices on UK. That means, at any one time, there’s the potential for over 44,000 EV owners to refuel.

That sounds like a lot, especially when you consider there are only 8,000 petrol stations in the UK by comparison. But there’s a real lingering concern that the current amount is not enough. Not just by numbers, but also because of their quality.

According to the EV Association for England, only 6% of drivers have never experienced public chargepoint problems. We can’t imagine it would be anything like that for those using petrol pumps.

What this shows is there is a long way to go. And, because of the surging interest, we’ll have to do it quickly.

As we’ve written before, there is a lot of data now that points to the fact that the number of EV’s on the road is outpacing the growth of public infrastructure. For example, between June 2020 to June 2021, all-electric car sales increased by 140%. Or, in real terms, by over 40,000. By comparison, the number of public chargepoints in the UK only increased by 35% during the same period.

How are we going to solve this?

Well, the answer we believe is on our doorstep, literally. While the number of public chargepoints will forever be playing catch-up with demand – as was the case in Norway who are arguably four years ahead of us on the EV path – we can get ahead of it quickly by sharing our own chargepoints.

According to a Sunday Times report earlier this year, there could already be about seven times more private chargers than public ones. Seven times!

Not only that, but this wealth of chargepoints are also located right up and down the country, not just in urban pockets or along the motorway – where many providers are focusing their money.

If we made available just 20% of this private network, we’d double the number of publicly available devices overnight.

And it’s better than just having more connectors, there are huge benefits to using a chargepoint managed by a private person (or persons) compared to a massive multinational, like BP. For one, the maintenance is probably going to be a lot better – how many people would leave their own charger broken – and easier to use as a consumer – everyone is familiar with home chargepoints.

Likewise, the price is going to be much more transparent. Whether that’s you pulling up and using someone else’s or them turning up to use yours. On our platform, we find most people charge between £5-10 per session or a clear hourly rate. That’s much cheaper than many public networks and, as an owner, will certainly cover any electric costs.

While for many the focus for refuelling your car is about speed and how quickly it can be done, that isn’t always useful. Yes, if you’re travelling on a long journey from Scotland to Cornwall, pulling over for 20 minutes will be far preferable to 6 hours.

However, we often forget about the other end. When you get to where you’re going, often in an unknown place, you want something that is convenient – because who wants to take trips out to service stations during a holiday.

I would much rather pull up and park at a beach-side house leaving my EV on charge than having to fret about making trips to the nearest ‘hub’.

So, what’s stopping us sharing our chargepoints?

It’s probably the same worry people had when they first heard of the sharing concept. ‘I don’t want other people to use my stuff’. ‘It makes no money’. ‘Nobody will use it’.

These misconceptions have always been proved wrong. Sharing chargepoints has been happening for years. In the early days of EVs, it was a lifeline to many owners. And now, they have never been needed more.

We can all play a part in ensuring EV’s succeed, and quickly. There is literally no other viable fuel alternative and the result of failure is continued impact from air pollution and climate change.

If you own a chargepoint and want to be part of the success, you should share your space with someone else. Not least, the one third of the population without off-street parking.

It’s very easy to get set-up and get going. If you are worried, you can always chat to us first and we’ll explain from first-hand experience in this area for many years.